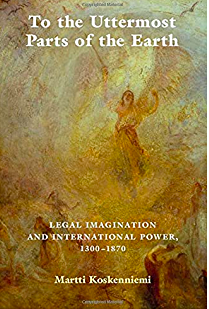 At some 1100 pages plus, Uttermost Parts is a heavyweight contribution in several senses of the word.  This review will broach the following questions: What is Koskenniemi trying to achieve, and has he succeeded? What do writers and teachers of international law have to re-think, if anything, as a consequence of the publication of this work?

Koskenniemi is disarming as to his aspirations: his first sentence is ‘This is not a history of international law.’ The book then is prehistory, or context, of what we now call international law. It spans most of six centuries and with a focus in turn on developments in what we would now call France, Spain, and Britain, and in the German speaking heart of Europe, it leaves us poised at the brink of the modern international legal system of The Gentle Civilizer of Nations: The Rise and Fall of International Law 1870-1960.

Koskenniemi’s magisterial survey takes in the Salamanca struggles over the status of Spain’s conquered ‘Indians’; colonial France, with slavery blithely overlooked by the revolutionary constitution-makers of the metropole; the institutionalized bad faith of British politicians pretending not to dominate India or China; the rigour of German articulations of statehood; and much, much beside. Contributions from philosophy and from political theory over these centuries are reviewed with great insight, and always with an eye to the humdrum realities of governance and of accountability even when the latter is ‘only’ to the deity. As far as methodology is concerned Koskenniemi’s key term is bricolage, by which he means (more or less) the just-in-time assembling of arguments, always for a purpose.

Towards the end of the book Koskenniemi says that his topic has been ‘legal imagination in its relationship to power abroad.’ ‘Abroad’ is a word with several meanings, one of which is ‘out and about’ or ‘on the loose’ or even ‘on the prowl.’ While wider than Koskenniemi’s meaning, it is a suitably elastic term. The many examples in the book are not readily characterised as being about ‘home versus away’, or ‘municipal versus international’, or ‘us versus them’ – ‘foreign relations’ so to say. Perhaps Koskenniemi is our anti-Schmitt.

In this context however, the claim at p800 that ‘squar[ing] the circle of the simultaneous validity of imperial and territorial laws [within the Holy Roman Empire] is the international law problem par excellence’ seems a little unreconstructed.

It seems to me that the first of Koskenniemi’s major achievements is, in demonstrating the immensely greater importance of civilian legal traditions as compared to English speakers’ vaunted common law, in the prehistory or ‘origin story’ of international law.

Second, the intertwining of political understandings of authority and of property, of sovereign power and private rights, the story of which is Koskenniemi’s golden thread, were immensely more complex and consequential than the parallel or even insulated development sometimes portrayed by other writers. Rather than princes and merchants operating in different worlds with the occasional fellow travelling, as with Elizabethan privateers, it is the moments of autonomy of one or the other that are the exception. For example, the significance of private property rights in the clash between Pope Boniface VIII and Philip of France, dealt with at the very beginning of the book, is both illuminating of larger processes and at the same time a vital component of a deeply legal and text-based contestation. And it is this writing-based nexus that provides the platform for Koskenniemi’s whole project, so that demonstrating the immense significance of written authority and written argumentation, and hence of book-based legal training, is itself a third achievement.

In terms of our familiar origin stories, the Treaty of Westphalia is, thank goodness, contextualized almost out of existence. Its treatment here reminds us how very primitive is the account of the prehistory of international law presented in the average textbook. Relatedly, the powers and limitations of the Papacy are traced by Koskenniemi in various periods from the late 13th century onwards. At no time did the Papal aspirations and the political actualities ever converge in the cartoon manner that our students cannot be blamed for interiorizing. Looked at in this way, the centrality of power as theme in Uttermost Parts is worked out in Foucauldian ways, with the capillaries of power being traced and indeed anatomized through discourse and through discourses. As Koskenniemi says at p12, this is ‘a history “of the present.”’

Does Koskenniemi successfully eschew grand narratives? In many ways he strenuously attempts to, anthropologically disdaining big picture formulae, instead adopting an inductive approach by which no common substantive connection need be found between examples that can all be categorized as the law of power abroad. Nonetheless, insistently reading everything through bricolage is itself a kind of grand narrative, especially when the legal training of participants is given so much explanatory heft amongst their materials at hand (where ‘materials at hand’ refers to available resources). The application of the term bricolage is perhaps no more rigorous than was the application of other structuralist vocabulary in From Apology to Utopia and as in that iconic work, the main function of the vocabulary may be just to  get the ball rolling. On practical matters, the bibliographical detail does seem excessive. Much of the content of the footnotes could have been located online, together with most of the 100 page Bibliography, original versions of translated materials, and English translations of passages in Latin. A slimmed down volume, perhaps trimmed to the modest 700 page length of From Apology to Utopia, would suffice to convey the text. In terms of the limitations Koskenniemi has imposed on himself in focusing his attention on Christian male writers, the rationale that he gives at p13 is very similar to that presented at the beginning of Gentle Civilizer, namely that to do so is in some way a gesture of protest at the discipline’s limitations; but this claim may be to protest too much. These are minor quibbles however. So long as too much oxygen is not taken from other writers in this age of the attention economy, the limelight accorded Koskenniemi is well deserved and this book will become part of the landscape for international legal scholars, and indeed part of the furniture for teachers of the discipline. How its contents and its claims will be appropriated, it remains to be seen.