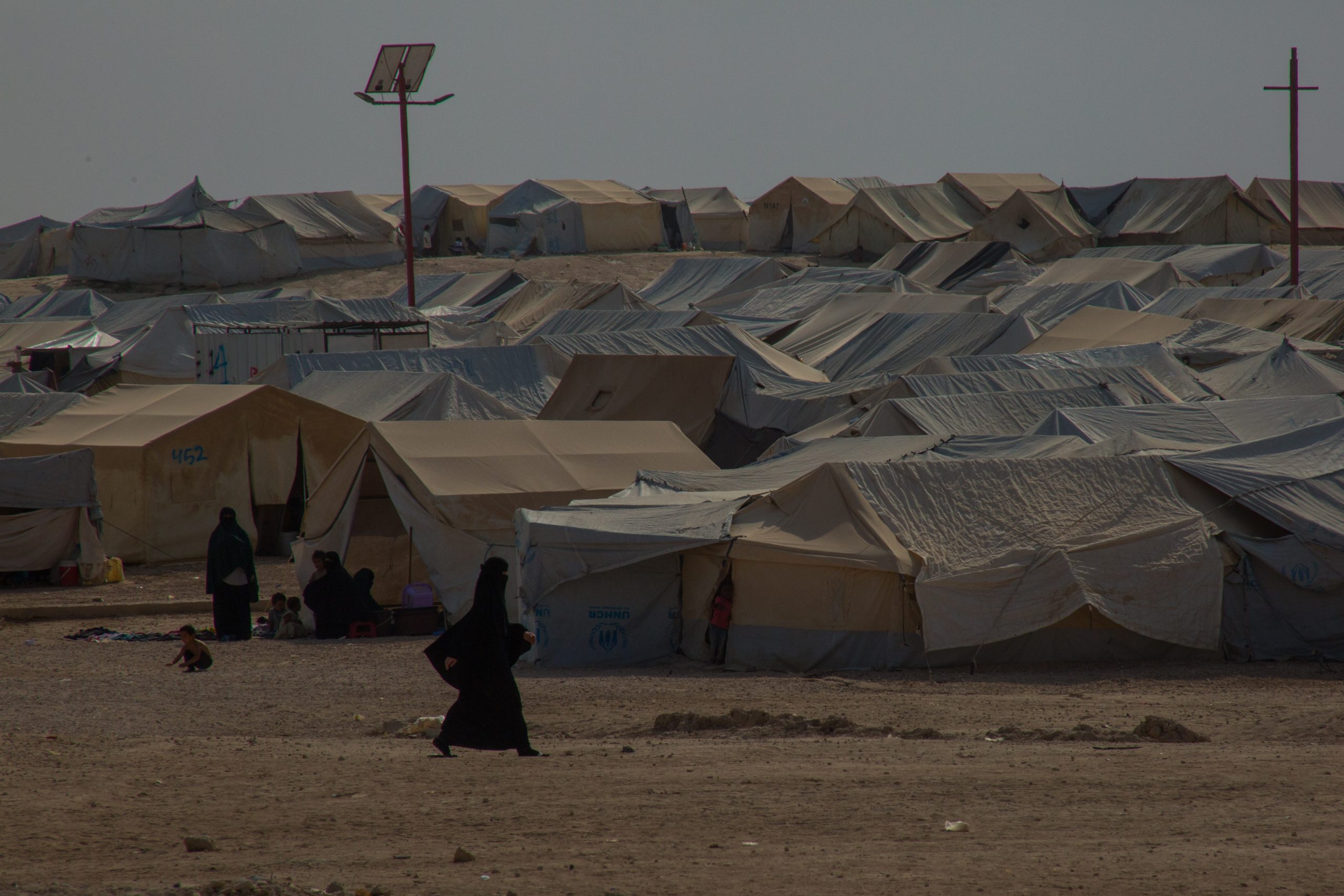 Stranded in the al-Hawl refugee camp in Northern Syria for the last two years, Australian women and children have desperately been seeking repatriation to Australia. In response, the Australian Government has steadfastly resisted repatriation efforts and requests. Underpinning this stance is an inchoate assertion — a perception — that these women and children have transferred their allegiance to ISIS.

Rebecca Barber argued powerfully in the last ANZSIL Perspective that humanitarian aid must continue. We suggest that arguments of this nature provide a moral foundation upon which to advocate for the repatriation of Australian woman and children, with repatriation efforts being intrinsic to the provision of humanitarian aid. Further, we believe that domestic legal intervention is necessary to protect Australian woman and children from an arbitrary loss of the bond of protection owed by the State, pursuant to international legal concepts and the core principles of the nation state.

In our first article, we sought to deploy state duties of protection for the benefit of women and children in this camp by linking such duties to the principle of legality — an analysis that resonates with the recent  UK decision to allow Shamima Begum’s repatriation, for the purposes of deciding whether she can be stripped of her citizenship. Here, by way of provocation, we consider whether the Australian government’s stance is arbitrary, insofar as it leads to a loss of citizenship — and, consequentially, lawful protection by the State — based on mere perceptions of transfer of allegiance.

Australian citizenship is concerned with formal membership of the Australian community. Membership connotes belonging and a relationship between citizen and community, as the sovereign body politic. Historically, at common law, being a ‘subject’ meant we ‘belonged’ to the body politic of the Crown, as demonstrated by our allegiance to the sovereign: the ‘true and faithful obedience of the subject due to his Sovereign’.

The bond of allegiance carries reciprocal obligations, where the State has a duty to protect and the citizen owes allegiance: Joyce v Director of Public Prosecutions [1946] AC 347. This substantive bond resonates with the notion of citizenship: common to both is the power and capacity to protect.

How, then, is ‘belonging’ and the relationship between citizen and community to be determined? In the absence of other indicators framing the connection between the individual and the State, concepts of loyalty and allegiance have been adopted, not least through references to ‘aliens’ owing allegiance to a foreign state: Singh v Commonwealth (2004) 222 CLR 322, 382–3 [154] (Gummow, Hayne and Heydon JJ).

Furthermore, if one belongs it is possible that one cannot be excluded from belonging to the community as body politic, even in the absence of holding statutory citizenship. In Love v Commonwealth, a narrow majority of the High Court found that Indigenous Australians had a bond of spiritual and territorial connection to the land and, therefore, ‘belonged’.

However, Love fails to provide a majority view on the broader nature of ‘belonging’. The following have all been rejected as indicative of this bond: long-term resident and ‘absorption’ into the community (PochivMacphee(1982) 151 CLR 101); personal connection to Australia (Shaw v MIMA (2003) 218 CLR 28), and; birth in Australia (Singh- supra and Koroitamana v Commonwealth (2006) 227 CLR 31).

Is the protection afforded by the State contingent upon the proper conduct of the citizen? In a general sense, history would suggest not: consider diplomatic intervention by the Australian Government in situations where Australian citizens have become entangled in the legal system of another State. In Love, Gageler J queried the appropriateness of describing the bond between an Australian citizen and the Commonwealth as one of allegiance and reciprocalprotection, as ‘reciprocity might imply conditionality’. If that is so, how might we interpret ‘reciprocity’? Is it an ‘exchange and mutual benefit’ or a bond necessarily characterised by the power differential that is inherent to the relationship between citizen and State?

Approaching ‘allegiance’ as a socio-political concept, Helen Irving argues that the citizen- state relationship is one of ‘singularity’ — that ‘[d]ual citizenship, while legally permitted sits uncomfortably with the idea that citizenship is defined by “allegiance”’. This, Irving suggests, ‘is the modern conundrum at the heart of schemes for citizenship revocation’. Is a citizen’s act of transferring allegiance to another State or entity, or the perception thereof, suggestive of his or her election to pursue single allegiance? If so, what significance is to be placed on a citizen’s invocation of State protection?

The principle of legality as the elephant in the room

In our first article, we argued that the principle of legality arises in the context of the State’s duty to protect in two specific instances. First, by way of allegiance, connecting the individual to the body politic of the State, an incidence of which is the duty to protect. This is a constitutional protection attached to the non-alien (Pochi v Macphee; Love v Commonwealth). Secondly, by way of the duty owed by the Commonwealth Executive to protect not only citizens but also aliens within Australia’s jurisdiction.

In the first context, a duty to protect is a fundamental characteristic of ‘belonging’, such that it is a barrier to revocation and (by extension) obstruction of the right to return (which cannot be arbitrarily removed). As a duty that resides within sovereign jurisdiction, in tandem with the operation of s 61 of the Constitution, the Courts have a constitutional role to play in reviewing the exercise of powers to revoke citizenship. This is to ensure that these laws, apparently enacted under s 51(xix), are compatible with the identification and nature of sovereignty and its link to belonging, from which the duty to protect arises.

In the second context, the jurisdiction of the State requires that everyone within the State’s jurisdiction — whether territorial or extra-territorial — is subject to, and owes a duty of obedience to, the law, with the State owing a concomitant duty to uphold the law. We might arguably find further evidence of this duty within s 61 of the Constitution; an argument not dismissed by Tamberlin J in Hicks v Ruddock.

What does this mean for the women and children in the al-Hawl refugee camp? How might we characterise their citizenship, dual or otherwise, when still intact and not yet subject to formal revocation? If the State’s duty to protect has been invoked but is not available — the only conclusion to be drawn from the Government’s approach to date

— then the question arises: Is there any substantive content left within the citizenship rights of these women and children? Are we witnessing the defactorevocation of their citizenship on the grounds of perceived‘belonging’, rather than on a basis supported by the protection of law?

Sue Milne is a Lecturer in Law at the University of South Australia. With a background in legal research within the federal judicial sector, Sue has presented, lectured and published in this field. Sue is currently a PhD candidate researching the constitutional validity of citizenship stripping, with research interests in public law, mainly constitutional and administrative law, legal method and legal history.

Cate Read is a Trial Division Researcher at the Supreme Court of Victoria and is currently undertaking a Master of Laws at Melbourne Law School. She has undergraduate and graduate degrees in political science and law, with a particular focus on human rights law. Cate was admitted to the Australian legal profession in 2008 and has held a volunteer legal practising certificate since 2009. She has worked as a volunteer lawyer at Fitzroy Legal Service and the Asylum Seeker Resource Centre, and has volunteered with the Health & Equality Policy Working Group at Thorne Habour Health.

Eamonn Kelly is a barrister at the Victorian Bar, previously Senior Associate to the Honourable Justice Ginnane in the Common Law Division of the Supreme Court of Victoria, He practices in administrative, commercial, criminal and common law. He is particularly passionate about areas of the law concerning the proper exercise of state authority, whether in civil or criminal contexts, judicial or executive. Eamonn completed a Juris Doctor and a Master of Laws at the University of Melbourne, specialising in Transnational and International Law. He received several subject prizes, including the Frank Galbally Memorial Prize and the Raynes Dickson Memorial Exhibition for Advocacy. He edited the Melbourne Journal of International Law.