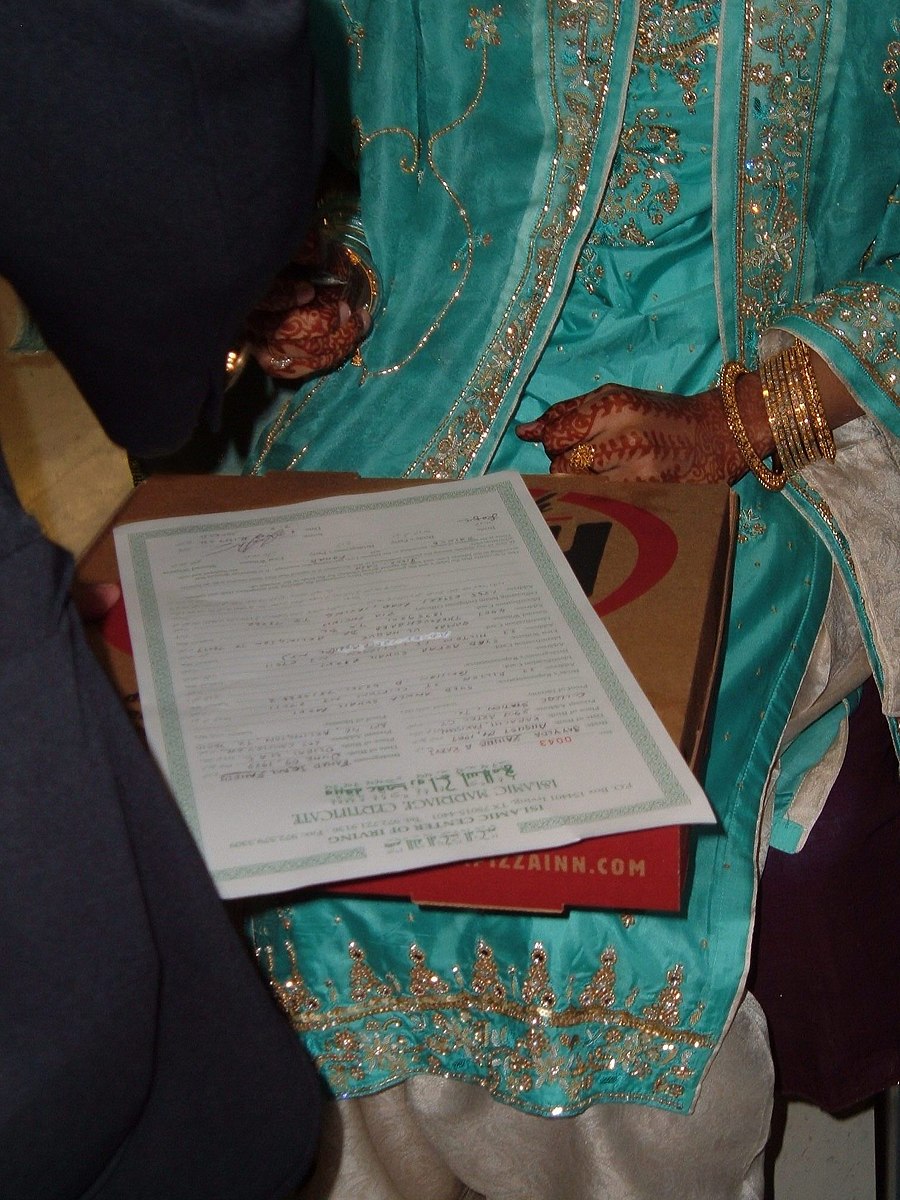 For the first time in New Zealand (NZ), the High Court in Almarzooqi v Salih [2022] NZHC 1170 recently ruled that a refusal to pay mahr (dower/dowry) as part of a marriage contract concluded overseas as per sharīʿa law, constitutes a breach of contract that is enforceable. In setting out the basis for this decision, this article provides the background to the litigation, the matters arising from it and demonstrates how this decision is in line with the approaches taken in other common law jurisdictions.

The parties to this litigation are Ms Almarzooqi, a citizen of UAE with residency status in NZ and Mr Salih, a NZ citizen. They are both Muslims and they got married in accordance with sharīʿa law in Dubai, UAE. This involved a Nikah (marriage contract), with the required component of mahr comprising of two payments by the husband to the wife; an immediate payment of 30,000 dirhams (approximately NZD215,000) and a deferred payment of 500,000 dirhams (approximately NZD13,000) conditional upon the husband’s death or divorce. These were recorded in the marriage Certificate issued by the Personal Status Court of Dubai (Dubai Court).

The couple were married for 5 months and lived together in NZ for only a month. Ms Almarzooqi filed for divorce in the Dubai Court. In granting the divorce, the Court also made an ancillary order for the payment of the deferred mahr. Mr Salih did not pay and Ms Almarzooqi initiated legal proceedings in NZ. The formation and validity of the contract was not challenged.

There are two sets of litigation history as one relates to the issue of whether or not NZ courts have the jurisdiction to enforce the ancillary order and the other looks to enforce the deferred payment based on contract law, be it the law of the UAE or NZ.

Regarding the first issue, the marriage contract is silent as to jurisdiction. Since the Reciprocal Enforcement of Judgments Act 1934 and Senior Courts Act 2016 do not allow for the enforcement of UAE judgments, the High Court turned to common law to assess enforcement of the ancillary order; [2020] NZHC 2441. This is the first occasion upon which a common law action of enforcement of a UAE judgment was considered in NZ and was contingent upon (citing Eilenberg v Gutierrez [2017] NZCA 270 at [30]): 1. That the foreign court had jurisdiction, 2. That the judgment is for a liquidated sum and 3. That the judgment is final and conclusive. As to whether the Dubai Court had the jurisdiction to make the ancillary order for it to be enforceable in NZ, Ms Almarzooqi relied on: 1. the signing of the marriage contract and 2. the fact that Mr Salih attempted to participate in the proceedings of the Dubai Court. However, the High Court stated that the signing of the marriage contract did not equate to submission to the Dubai Court’s jurisdiction. Furthermore, Mr Salih’s attempt to file documents opposing the grounds for divorce (which was rejected by the Dubai Court’s Registrar) was not to be taken as submission to the Court’s jurisdiction either because as per New Zealand law, “submission to the jurisdiction is a technical term that involves taking some unqualified formal step in the proceeding, usually by entering a defence”; at [38]. Mr Salih was prevented from doing this and a default judgment was issued, which as per NZ law, the Court did not have jurisdiction over Mr Salih to do so.

Significantly, the High Court held that the Dubai Court’s judgment in granting the divorce and the ancillary order begs different jurisdictions of the Court. The grant of divorce is a judgment in rem (or a judicial pronouncement to the world generally) which it had the jurisdiction for, but not for the judgment in personam (as is pronounced against the individual(s) concerned) insofar as it relates to the ancillary order; [2020] NZHC 2441 at [36]. Hence, whilst s 44 of the Family Proceedings Act (NZ) allows for recognition of the divorce, it does not extend to the ancillary order. This was sufficient to dispose of the summary judgment. Had jurisdiction not been an issue, the court expressed that:

and hence would have granted Ms Almarzooqi’s application to enforce the order; at [63] and [2021] NZCA 330 at [23]. Since that was not the outcome, Ms Almarzooqi appealed.

Ms Almarooqi then appealed to the Supreme Court which did not find any error with the Court of Appeal’s assessment and the application was dismissed.

With the issue of jurisdiction put to rest, changing tact Ms Almarzooqi brought an action for breach of contract. This required the High Court to determine the proper law of contract.

As with jurisdiction, the marriage contract is silent as to the governing law of contract. The High Court considered that the contract was universal to Muslim traditions everywhere in the world. However, given that the couple got married in the UAE in accordance with a particular tradition and the divorce process and the grounds for it are concepts which are informed by principles of sharīʿa law, the Court determined that “on balance” the proper law of contract was that of the UAE; at [26]. If so, then as Mr Salih had not paid the deferred mahr, he was in breach of the marriage contract. The High Court opined that the result would not be different if the proper law is NZ contract law; see at [49]. Having assessed the evidence of three expert witnesses, the High Court came to the conclusion that regardless of which process is followed for divorce under the UAE law, the fact of divorce triggered the obligation to pay the deferred mahr, which was owed since the date of the divorce, together with interest. As a closing remark, the High Court further stated that Mr Salih’s “case was dependent upon … findings as to the requirements of sharīʿa law…”

Preferring the expert evidence of practitioners in Dubai over one who had no specialised training in sharīʿa principles, the Court conveyed that a “witness with appropriate authority to assist the Court is to be expected”; at [48]. This is reinforced by the Supreme Court’s recent pronouncement regarding the use of expert evidence to view a legal matter within a cultural context; see Deng v Zheng [2022] NZSC 76.

It is notable that sharīʿa based marriage contracts have been enforceable in other common law jurisdictions. The leading English case of Shahnaz v Rizwan [1965] 1 QB 390 concerned a marriage contract formed in India under “Mohammedan law.” The contract provided for the payment of a deferred mahr upon divorce, which the wife sought to enforce. The Divisional Court characterised the mahr as a contractual obligation upon the husband and held that it was enforceable by the wife in the English courts. In the leading Australian case of Mohamed v Mohamed [2012] NZWSC 852 the couple had married in a sharīʿa ceremony, not under Australian law. Their agreement provided for the payment of mahr to the wife in the event the husband initiated separation and/or divorce. As this was the first Australian case, the Supreme Court noted that in enforcing such contractual agreements, courts of common law countries such as United States, England and Canada have applied common law or the relevant legislation (if any), rather than sharīʿa law.

Even though a leave to file an appeal against the current High Court’s decision has been granted, precedent cases overseas dictate that this decision is most likely to be upheld by the Court of Appeal. This would mean that those seeking to enforce sharīʿa based marriage contracts, whether it was formed locally or abroad, can be rest assured that absent valid legal exceptions, the contract will be enforceable in NZ provided that the contractual conditions triggering the obligation to pay the mahr are met.

Dr Durgeshree Raman has been lecturing at Te Piringa - Faculty of Law, University of Waikato since completing her doctoral studies on transboundary freshwater governance in 2015. Durgeshree has taught a range of law papers including Equity, Trusts, Succession, Family, Crimes, Evidence and Legal Systems. She has a number of publications including the most recent - Raman, D and Chevalier-Watts J, Equity, Trusts and Succession (2nd ed, 2022, Thomson Reuters). Durgeshree is also an enrolled Barrister and Solicitor of the New Zealand High Court and has previously worked as a Lawyer and Judges’ Research Counsel.