BOOK REVIEW:  On Tyranny and the Global Legal Order by Prof Aoife O’Donoghue  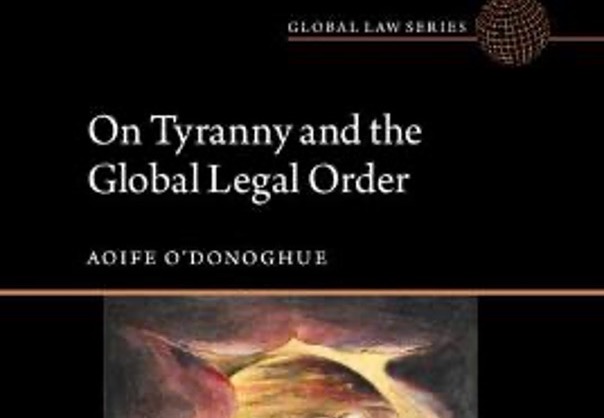 While the question of tyranny and how the law creates and supports tyranny in society arises frequently in research, including my own, until this delightful new book there has been no comprehensive treatment of the concept. In On Tyranny in the Global Legal Order, O’Donoghue engages with the deep historical review of the philosophical thought on what constitutes tyranny before engaging in an exploration of what that means in our contemporary context. This is both important and valuable because, as O’Donoghue notes, the concept of tyranny shortly after World War II became somewhat banished from political thought in favour of related, but less adaptable, ways of expressing governmental oppression in society. O’Donoghue’s writing is cogent and engaging, and I would heartily recommend the book to anyone with an interest in either the historical philosophical origins of thought on tyranny or in global political interplay.

The book itself is divided into five chapters, with chapters one and three doing a lot of heavy lifting on ensuring that the reader is across the wide-ranging historical literature that anchors the work in the other chapters. When I say wide-ranging, I’m not being hyperbolic – O’Donoghue covers the key thought on the concept of tyranny from Ancient Greece in a continuous thread to contemporary theory. It is this meticulous but accessibly explained exploration of philosophical thought about how we understand the nuance of tyranny that sets up what I think is the most significant and valuable contribution of this book: a taxonomy of tyranny. The value of the taxonomy of tyranny, as O’Donoghue notes on page 83, is that, unlike the definition, a taxonomy is flexible and adaptable allowing it to be kept current as society and culture develops rather than being mired in a no longer relevant past conception. The other value of the taxonomy is that it allows for a diagnosis of society caught in tyranny based upon an accumulation of events rather than that diagnosis being held back by the need for absolute precise conformity to a definition. The insight provided in this chapter alone is staggeringly erudite and one that I have no doubt I will be returning to frequently when considering questions of oppression through law in society.

While I enjoyed and thoroughly recommend O’Donoghue’s book there were elements that frustrated me. In chapter four where O’Donoghue looks at the question of scale and empire in tyranny, the first half of the chapter was somewhat opaque.  O’Donoghue’s discussion of the operation of scale theory in relation to tyranny relied more than I was comfortable on at least a passing knowledge of how scale theory functions. The theory itself, explained in the first half of the chapter, became clearer as I read the case study analysis of the UN Security Council in the latter half of the chapter, but I feel like more could have been done to make the theory set up more accessible before the case study. In relation to the case study itself, as someone who has done a lot of work on the Security Council I found that a number of scholars – established and emerging – who I would expect to see on any significant discussion of the Security Council were absent from the footnotes. Instead, O’Donoghue has relied upon theorists who, like her, have relied upon the Security Council to demonstrate the working of their theory. This isn’t an inherently a problem, and I agree with her analysis on the Security Council – especially the conclusion that the Security Council operates in a rule by law and thus tyrannical framework – but to my mind the analysis would have been stronger by turning to subject matter experts instead of relying upon theorists.

The other area I would have liked to have seen more exploration of is a point that O’Donoghue notes but mostly allows to fall by the wayside. Namely the way in which Cis/het misogyny and queerphobia underpins so much of the history of tyranny. O’Donoghue notes that masculine modes of power are presumed by theorists discussing tyranny, and that femme presenting people are treated as inherently suspicious based upon masculine assumptions that if the feminine were to be given the power masculine subjects wield that it would be used in the same way that they wield it. This is then combined with the tendency to frame those accused of tyranny as queer in an effort to undermine their regime and position. While O’Donoghue picks up later on feminist responses to tyranny briefly, this overarching thread of misogyny and queerphobia mostly falls by the wayside but to my mind is ripe for a queer theory analysis and investigation that could have taken place but didn’t.

Overall, O’Donoghue makes a compelling argument that tyranny as a concept is one that needs to be returned to our lexicon when discussing international law and its interplay with global politics. The basis of this argument is that tyranny as a concept is broader and more adaptable than the concepts we tend towards today such as totalitarianism, fascism, and authoritarianism for example. O’Donoghue’s argument that we can do this through the use of a taxonomy of traits that mark tyranny in society is insightful and cogent. I would recommend reading this book to anyone who has an interest in the interplay between power, law, and legitimacy.

Tamsin Phillipa Paige is a Senior Lecturer with Deakin Law School and periodically consults for the UN Office on Drugs and Crime in relation to Maritime Crime. Her work is interdisciplinary in nature, using qualitative sociological methods to analyse international law. She also does law and literature research using popular fiction to understand social perceptions of the law.  Tamsin’s work has examined (among other things) Somali piracy, UN Security Council decision making, and conflict based sexual violence. In a former life, she was a French trained, fine dining pâtissier.