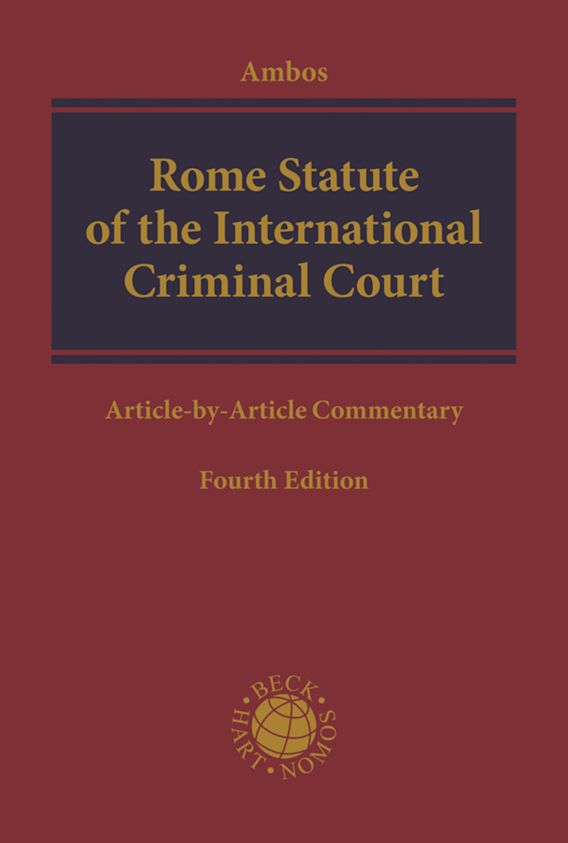 Anyone who has researched, studied or practised in the field of international criminal law will be familiar with Triffterer’s Commentary on the Rome Statute. First published in 1999, the volume is now in its fourth edition, and is the first with Kai Ambos as sole editor. The third edition in 2016 was co-edited by Otto Triffterer and Ambos, and published soon after Triffterer’s death. The fourth edition is again dedicated to Triffterer’s memory as the ‘founder and father’ of the commentary.

The new edition comes six years after the third version, and after arguably the most ‘active’ era in the International Criminal Court’s history. In the past five years there has been significant new case law, amendments to the rules of procedure and evidence, and the introduction of new crimes. The Commentary’s coverage of these developments is evidenced by the fact that the already hefty tome is now 3064 pages.

Some of the key decisions handed down over the past few years involved legal issues or procedural questions that had not previously received consideration by the Court. For example, in 2016, Jean-Pierre Bemba Gombo became the first accused to be convicted via command responsibility and the first to be convicted of war crimes and crimes against humanity involving sexual violence. In 2018, Bemba also became the first defendant to have his conviction overturned on appeal. Also in 2016, the ICC handled its first prosecution for the war crime of intentionally directing attacks against religious and historic buildings, with Ahmad Al Faqi Al Mahdi becoming the first accused to plead guilty before the Court.

Other important decisions have contributed—for better or worse—to existing ICC jurisprudence. Whether or not the opening of an investigation into the situation in Afghanistan would serve the interests of justice in accordance with Article 53 of the Statute was resolved in the affirmative by the Appeals Chamber in 2020. The lengthy proceedings in the Omar Al Bashir litigation on head of state immunity and state party cooperation obligations came to an end in 2019 with the Appeals Chamber affirming Al Bashir is not immune from arrest and transfer to the ICC.

Such decisions provide rich source material for analysis and critique of the Rome Statute’s application. This is reflected in the continuing evolution of the Commentary from its first iterations in which there was an emphasis on historical development and broader interpretation of the Statute, to a more practical resource providing important contemporary context and evaluation of current ICC jurisprudence and practice.

As a result of new ICC case law and, in some instances, new Commentary contributors, there have been some significant revisions or rewrites of certain chapters. Article 28, for example, on the ‘responsibility of commanders and other superiors’ has been shortened by reducing the lengthy summary of the historical development of the doctrine in favour of getting into the analysis of the elements of the provision. The ICC’s Bemba decisions now feature prominently in the discussion. Conversely, Article 98 ‘cooperation with respect to waiver of immunity and consent to surrender’ is an example of a chapter that has been significantly expanded for the new edition. Article 98 was the subject of much of the Al Bashir litigation, with the Appeals Chamber’s reasoning in relation to immunity causing considerable controversy among academic commentators. Claus Kreβ, who is now listed as the sole author of this chapter, dives into the legal complexities and evaluates competing views of the immunity question.

One of the criticisms levelled at the previous edition was that there was not sufficient inclusion of relevant state practice in the Commentary. It was contended that focusing on the law and practice of the ICC and other international criminal tribunals meant that judgments and decisions of domestic courts were given short shrift. While it is true that Article 21 provides that the Court shall apply customary international law as one of the sources of applicable law, the Commentary itself is not intended to be a compendium of international criminal law custom. Given the increasing volume of decisions generated by the ICC, it makes sense that the Court’s jurisprudence should now be at the core of the Commentary.

An editorial decision that demonstrates this tighter focus on ICC practice can be seen in a note at the end of the literature section in the chapter on Article 7: ‘the former items 6-9 (Decisions of the ICTY and ICTR, Decisions of national courts, national legislation) have not been continued and can be consulted in the previous edition at pp. 149-151’. Condensing and pruning material is also a smart and necessary move to keep the length of the Commentary within a single, manageable volume, while ensuring previous editions are not automatically obsolete. This will likely become more common practice in future editions of the Commentary.

As well as providing an update of the ICC’s case law, one of the objectives of the fourth edition is ‘to provide clarity and structure of presentation as well as greater consistency’. The volume has been reformatted to improve readability – headings, paragraph spacing and the format of quotations have undergone small, but useful, changes. A welcome addition is the inclusion of the well-organised table of cases at the end of the volume.

There are still some minor inconsistencies of presentation among chapters, notably the liberal use of bolded text in some chapters and its absence in others. A more substantial inconsistency to be remedied for the next edition should be to refocus the literature lists at the start of each chapter. Some chapters appear to be aspiring for completeness rather than selectivity; other chapters barely scratch the surface of the important literature on the topic. See, for example, the clear disjunction between the five sources listed for Article 6 Genocide, and the many hundreds listed for Article 98.

No doubt this new edition of the Commentary aims to be the starting point for anyone conducting research relating to the Rome Statute. At RRP A$995, however, it is a significant investment, indicative of a wider concern that access to important international law texts is limited by cost. For anyone who does manage to get their hands on a copy, they will be rewarded with finely-tuned, well-researched and up-to-date commentary on the Rome Statute.

Monique Cormier is a Senior Lecturer at the University of New England School of Law in Armidale, New South Wales. Her main research interests are jurisdiction in international criminal law and legal issues relating to nuclear non-proliferation. Recent publications include The Jurisdiction of the International Criminal Court over Nationals of Non-States Parties (Cambridge University Press, 2020) and ‘Can Australia Join the Nuclear Ban Treaty without Undermining ANZUS?’ (co-authored with Anna Hood, Melbourne University Law Review, 2020).