BOOK REVIEW: Neuroscience and the Problem of Dual Use: Neuroethics in the New Brain Research Projects 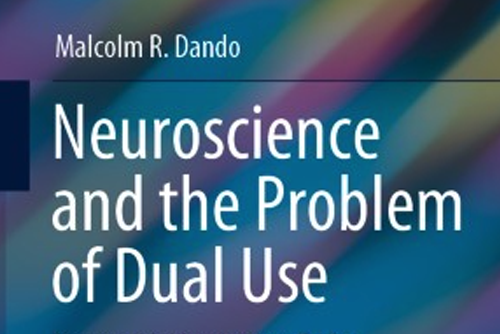 In many scientific fields, dual use is seen as an opportunity, not a risk. As limitations on the development and use of biological and chemical weapons have developed over the years, one of the last frontiers is the human brain. Rapid advances in the ability to manipulate the human brain pose many opportunities, but as these opportunities are explored, the risks of potentially disastrous hostile applications, or their use on the battlefield, are very real and present.

Dando is well placed to set these risks in the broader context of chemical and biological non-proliferation regimes over the past century, having participated in many of them personally. Dando extends our knowledge by looking forward to analyse the risks that rapid advances in brain technologies might pose, and how they might evolve in the future, in realistic and concrete ways, based on current research and significant funding for this area.

This book discusses recent brain research and the potentially dangerous dual-use applications of the findings of these research projects. The book is divided into three sections. Part I examines the rise in dual-use concerns within various States’ chemical and biological non-proliferation regimes during the 21st century, as well as the rapid technologically-driven advances in neuroscience and the associated possible misuse considerations in the same period. Part II reviews the brain research projects in the EU, USA, Japan, China and several other countries with regard to their objectives, achievements and measures to deal with the problem of dual use. Part III assesses the extent to which the results of this civil neuroscience work, which is intended to be benign, are being and could be protected against future hostile applications in the development of novel chemical and biological weapons. Such hostile applications raise the spectre of science applications previously only possible in the realm of science fiction.

The distinction between chemical and biological action blurs at the nanoscale, which is, in fact, the level on which much of our brain activity, and the study of neuroscience, takes place.[3] Experts from the BWC and the CWC meetings need to regularly reiterate that developments in the use of nanomaterials are included within the ambit of both the BWC and the CWC. Nanomaterials can asphyxiate without a chemical action (such as asbestos fibres, which occur on the nanoscale), or assemblies of atoms that can behave like a pathogen.[4] Beyond this blurring of behaviour, the properties of nanomaterials often differ from their regular-scale counterparts, sometimes even when only one component of a material is at the nanoscale.[5]

Neuroscience working with nanomaterials would also be captured by the language of the 1899 and 1907 Hague Conventions, as well as the Geneva Protocol which prohibits ‘poison and poisoned weapons’. This approach is practical and in accordance with the existing customary international law prohibitions on poisons and chemical weapons. Arguing about whether a substance at the nanoscale acts on its chemical or physical properties will seldom change the outcome of the conclusion of a legal review: weaponisation of nanoparticles by any means flies in the face of existing customary international law standards regarding matter at regular scale, and therefore any use of matter in similar ways at the nanoscale would be prohibited.

Finally, damage to health does not need to be permanent to violate the prohibition on torture or cruel, inhuman or degrading punishment. In the case of Antipenkov v Russia, the use of rubber truncheons, despite not causing long-term damage to health, were found to have caused mental and physical suffering. It sufficed that the detainee had been subject to inhuman and degrading treatment by Russian officials.[6] This decision highlights that the reversibility of damage does not mitigate the prohibition on torture. If neuroscience were to be used to enable without the consent of individuals during peacetime, this would also violate the prohibition on torture.[7] An example would be where nanomaterials were used to alter human behavior temporarily, which may still constitute torture.

The book concludes that greater neuro-ethics is needed – I think it could go a step further. Although the work of Gregor Noll, such as ‘Weaponising neurotechnology: international humanitarian law and the loss of language’, is mentioned it would have been good to see more references to his work, as well as some other more critical work by Filippa Lentzos referenced as well, particularly her recent work on synthetic biology. Although the BWC and the CWC are referenced, and the machinations of some of the existing work outlined (Zagreb, and the Code of Conduct), the book could go further to make more concrete recommendations for additional strengthening of existing agreements, or ways in which misuse and dual use of emerging technologies are, or could be, more effectively limited, including those in the field of neuroscience more actively engaging in policy making. Nonetheless, this an excellent expose of brain research projects, as the book promises.

Ethics can go some way to addressing some of the issues that arise from recent brain research, and is of great interest, but just as significant are the hard limits and prohibitions that should prevent States from developing these technologies for dual and hostile use in the first place. This book provides a sound entry point into the history of the dual use issue in neuroscience, and in particular, to the existing legal frameworks. How they may be applied, and will be applied, further writing and time will tell.

[1] Convention on the Prohibition of the Development, Production and Stockpiling of Bacteriological (Biological) and Toxin Weapons and on Their Destruction, opened for signature 10 April 1972, 1015 UNTS 163 (entered into force 26 March 1975).

[2] Convention on the Prohibition of the Development, Production, Stockpiling and Use of Chemical Weapons and on their Destruction, opened for signature 3 September 1992, 1974 UNTS 45 (entered into force 29 April 1997).

[3] Mark Wheelis and Malcolm Dando, ‘Neurobiology: a case study for the imminent militarization of biology’ (2005) 87(859) International Review of the Red Cross 560.

[7] This standard is upheld under the Convention against Torture. For further discussion of relevant literature and jurisprudence, see Manfred Nowak and Elizabeth McArthur, The United Nations Convention against Torture: A Commentary (Oxford University Press, 2008). Under the Optional Protocol to the Convention Against Torture and Other Cruel, Inhuman or Degrading Treatment or Punishment, opened for signature 4 February 2003, 2375 UNTS 237 (entered into force 22 June 2006), States are also required to established ‘national preventative mechanisms’ against torture.

Dr Kobi Leins (GAICD) is a Senior Research Fellow in Digital Ethics in the Faculty of Engineering and IT, with the Centre for AI and Digital Ethics, University of Melbourne. Leins is a Non-Resident Fellow of the United Nations Institute for Disarmament Research; Advisory Board Member of the Carnegie AI and Equality Initiative; and technical expert advising the International Standards Organisation on AI Standards. The focus of her research is on responsible innovation of AI and the life sciences, in association with an IEEE group of the same name that she recently co-launched.  Leins' book on ‘New War Technologies and International Law: What are the Legal Limits to Weaponising Nanomaterials?’ will be available through Cambridge University Press this year.