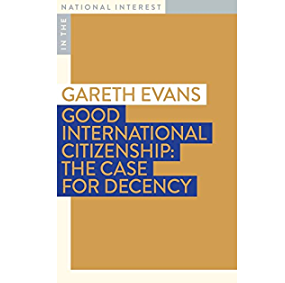 Long ago in a galaxy that now seems far, far away, Gareth Evans was Foreign Minister in the Hawke-Keating Labor governments.  In that capacity, he promulgated “good international citizenship” as a central part of Australian foreign policy – the idea of being a constructive, multilateralist, generous(ish) member of the international community.  The doctrine was promptly rejected by the succeeding Howard government which put the (much narrower) national interest above all else.  As a result, good international citizenship faded from public discourse apart from an occasional mention by the Rudd and Gillard governments.

Gareth Evans’s latest publication seeks to remedy that neglect and to remind us once again of the merits, and measurable advantages, of good international citizenship.  In an essay published in book form as Good International Citizenship: The Case for Decency (part of Monash University’s “In the National Interest” series), Evans has once again pressed the case for why Australia – and any state – should be a good international citizen.  He describes the concept as having four elements:  being a generous overseas aid donor, promoting human rights, working to prevent armed conflict and atrocities, and actively supporting multilateral efforts to address global threats such as climate change and nuclear war.  As to why a state should thus look beyond its immediate national interest, Evans argues that there are two broad reasons.  First, it is simply the right thing to do:  we have a moral duty towards our fellow human beings “to do the least harm, and the most good” that we can.  Secondly, it is actually in our national interest to do so.  “Decent international behaviour” helps to solve global problems to all states’ benefit and enhances a state’s international reputation – and, consequently, its “soft power” ability to influence outcomes.