BOOK REVIEW: Petulant and Contrary: Approaches by the Permanent Five Members of the UN Security Council to the Concept of “Threat to the Peace” Under Article 39 of the UN Charter by Dr Tamsin Paige 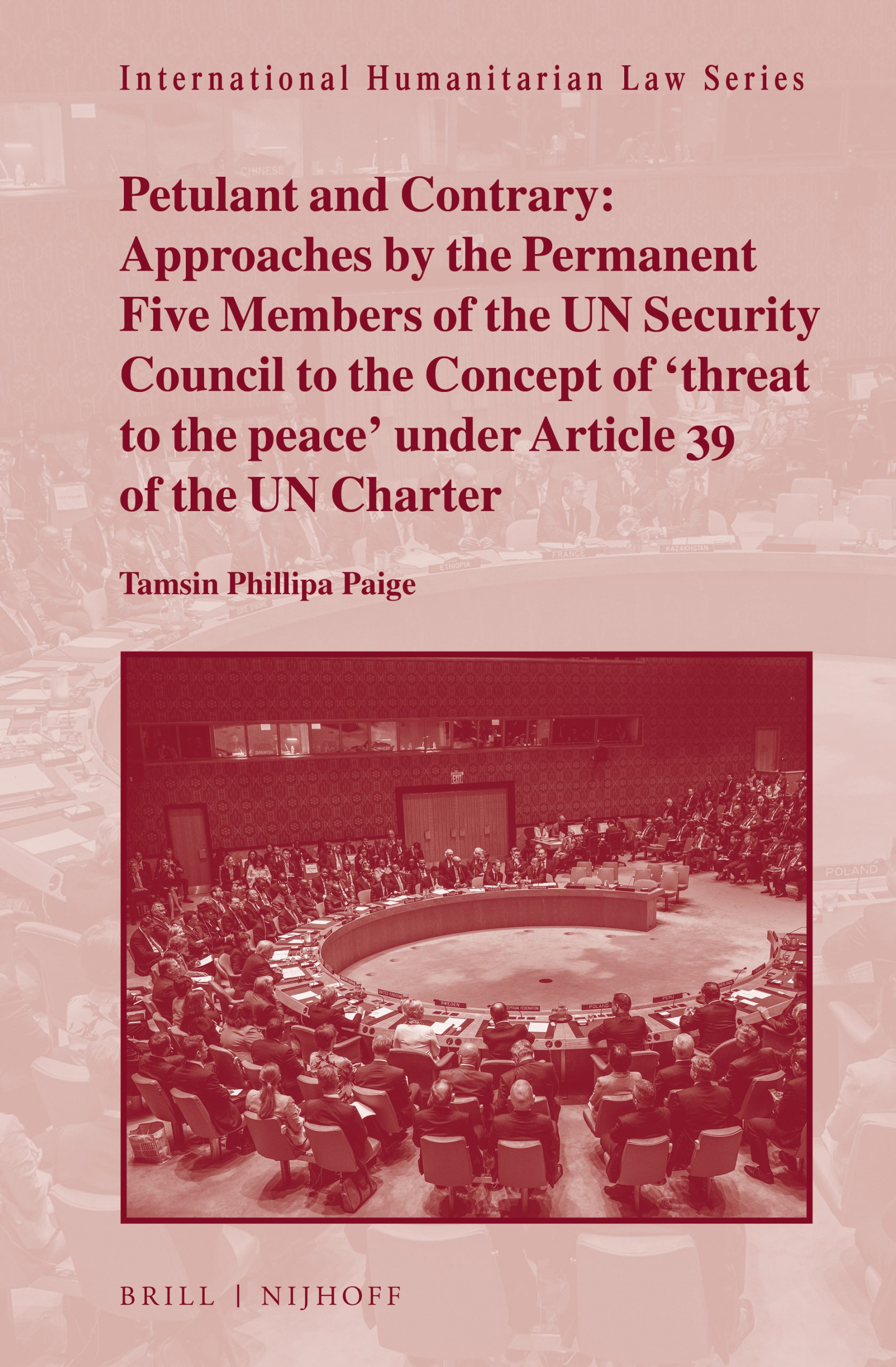 One of the key issues in the UN system that has bedevilled international lawyers since 1945 is how the term ‘a threat to the peace’ in article 39 of the UN Charter should be understood. When invoked, the term unlocks the Security Council’s extensive Chapter VII powers and enables the Council to take an array of actions including authorising the use of force, imposing sanctions and issuing international legislation for the world. However, precisely what amounts to a threat to the peace – or indeed whether the term can be legally defined at all – is unclear. There are two broad schools of thought: the first holds that the term does have a legal definition (although the definition is contested), while the second maintains that the term is legally undefinable and instead a threat to the peace is whatever the Council determines a threat to the peace to be.

In her innovative and highly valuable book, Petulant and Contrary: Approaches by the Permanent Five Members of the UN Security Council to the Concept of “Threat to the Peace” Under Article 39 of the UN Charter, Dr Paige argues that, from a black letter law perspective, the second school of thought is correct: the term is undefinable. However, she asserts that if we break out from the strictures of doctrinal approaches and adopt a legal sociology methodology it is possible to see that each permanent member of the Council has an internal working definition of a threat to the peace which guides their actions in the Council.

To identify the internal working definitions of each of the permanent members, Dr Paige meticulously works through many of the Council communications that touched on the concept of a threat to the peace between 1945 and 2013. Specifically, she uses critical discourse analysis to identify the ‘justificatory discourse’ each permanent member employed when determining whether a particular situation amounted to a threat to the peace and then, through a process of mega-synthesis, establishes the patterns, values and factors that characterised the approaches of each of the permanent members to the term over the 68-year period.

The results of this detailed work are incredibly rich and provide fascinating and useful insights for comprehending how the permanent members understand the scope of article 39. Further, Dr Paige points out an array of further research questions that arise from the findings. For example, what can explain the shift in the US approach to a threat to the peace from legal formalism in the Cold War period to a more emotive approach in recent decades?

The book is a treasure-trove of information and anyone with an interest in the Council has a lot of gain not only from its substantive chapters but also from the tables and graphs in the book’s annexes that set out the key data on which Dr Paige’s analysis is built. As I read it though, I wondered about Dr Paige’s assertion that her work was separate from, and had no purchase for, doctrinal approaches to the Council’s work. Throughout the book, Dr Paige highlights the fact that the Council’s permanent members have frequently justified their decisions about whether a particular situation amounts to a threat to the peace by using international legal language and reasoning. This suggests that far from seeing a threat to the peace as an ‘undefinable’ term, the permanent members understand it as a concept that has legal content and parameters.

One of the reasons Dr Paige suggests that her work does not help with black letter law attempts to define a threat to the peace is that the Security Council documents she analyses – such as the Council’s debate transcripts – are not a formal source of law under article 38(1) of the ICJ Statute. While I agree that documents such as the Council debate transcripts do fall outside the scope of the sources in article 38(1) of the ICJ Statute, I am not so sure that they cannot assist with doctrinal analyses of article 39. Article 39 is a term in a treaty that is subject to the rules of treaty interpretation in articles 31 and 32 of the Vienna Convention on the Law of Treaties. Pursuant to those rules, it is possible to have regard to the subsequent practice of the states parties when determining the meaning of a treaty term and, in many ways, it makes sense to see the debates of the Security Council as evidence of subsequent practice in this context.

The utility of relying on the Council debates as subsequent practice is potentially undercut by Dr Paige’s conclusion that while it is possible to discern patterns within each of the permanent members’ approaches to a threat to the peace, there are no clear patterns across all five members’ approaches to the term. However, this conclusion is reached when looking at all of the permanent members’ thoughts on a threat to the peace over the lifespan of the Council. A slightly different approach would be to consider whether it is possible to distil some common ideas about the legal content of a threat to the peace in particular periods of time in the UN’s history. Patterns might not necessarily emerge in a single Council debate but similar ideas and reasoning might appear across a series of debates in a certain period. Further, it might be possible to explore the idea that a definitional element that is repeatedly put forward by a number of states, and that is not objected to by other states, is able to amount to relevant subsequent practice. If patterns could be discerned from this process, it might suggest that it is possible to legally define the content of a threat to the peace but that exactly what that definition consists of is liable to change over time.

The idea that Dr Paige’s work may have implications for doctrinal approaches to article 39 of the UN Charter in no way undermines the analysis and conclusions she puts forward in the book; it simply opens up further spheres where her original, thoughtful work might be applied. Regardless of whether the work is extended to such spheres, it has much to offer and I look forward to seeing the conversations and research projects it inspires in the years ahead.