The International Legal Implications of AUKUS: A Poor Precedent for Non-Proliferation 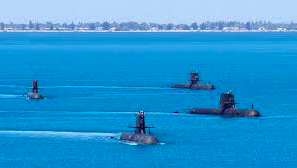 We don’t yet know very much about the AUKUS trilateral security partnership beyond the announcement that its ‘first major initiative… will be to deliver a nuclear-powered submarine fleet for Australia’. This news triggered a wave of commentary on the diplomatic, security and technical implications of Australia’s planned acquisition of nuclear-powered submarines, but the legal implications of this development have yet to be fully explored. In this short piece I will consider the potential ramifications for the international nuclear non-proliferation regime, focusing on the Nuclear Non-Proliferation Treaty of 1968 (NPT) and related agreements.

At the time of the AUKUS announcement, Prime Minister Scott Morrison took pains to assure the world that Australia has no plans to develop or otherwise acquire nuclear weapons, nor does it intend to develop a civilian nuclear industry. The submarines would be conventionally armed and powered by naval nuclear propulsion technology shared with Australia by the US and the UK. This, Morrison asserted, means that the acquisition of nuclear-powered submarines will not fall foul of Australia’s nuclear non-proliferation obligations under the NPT. What are these obligations?

Australia is a party to the NPT which is the principal international agreement for the non-proliferation of nuclear weapons. It contains different obligations and responsibilities for those states that possess nuclear weapons and those that do not. Under the NPT, non-nuclear weapon states have promised not to manufacture or acquire nuclear weapons or nuclear explosive devices. Non-nuclear weapon states are allowed to develop and use nuclear energy for ‘peaceful purposes’, with the caveat that they allow the independent International Atomic Energy Agency (IAEA) to verify that any nuclear material is not diverted to the development or manufacture of nuclear weapons.  There is no definition or explanation of what constitutes ‘peaceful purposes’ in the NPT. While nuclear propulsion technology is clearly not the equivalent of a nuclear weapon or a nuclear explosive device, it is not as if these submarines will be used to conduct peaceful scientific exploration.

This question of non-peaceful nuclear activities that do not involve nuclear weapons takes on greater significance when we consider the legal grey area in the NPT-IAEA safeguards system. This grey area falls between the NPT’s prohibition on non-nuclear weapon states manufacturing and acquiring nuclear weapons on the one hand, and the NPT’s requirement that non-nuclear weapons states accept IAEA safeguards on fissionable material to be used in peaceful nuclear activities on the other. The NPT is silent on the use of nuclear material by non-nuclear weapon states in military activities not specifically banned by the treaty, which means there is no requirement that any nuclear material used for such non-peaceful, non-proscribed military purposes be subject to the IAEA verification regime.

The comprehensive safeguards agreements between the IAEA and non-nuclear weapon states make this apparent gap in the NPT more explicit. The NPT requires non-nuclear weapon states to conclude comprehensive safeguards agreements with the IAEA, the majority of which are based on a 1972 document referred to as INFCIRC/153. Paragraph 14 of this document—and the equivalent Article 14 of most concluded safeguards agreements—allows a state party intending to use nuclear material for ‘non-peaceful’, ‘non-proscribed military activities’ to make an arrangement with the IAEA under which that nuclear material will be ‘unsafeguarded’. Such material may be withdrawn from the IAEA verification regime only for the period in which it is being used in said non-peaceful activities. There are complex technical considerations that dictate when the material should be reinstated under the safeguards system, but it is left to the states withdrawing the material to be honest and transparent about when the safeguards should be reactivated. The purpose of this loophole in the verification regime is so that states are not obliged to share information about classified military technology with the IAEA. But once nuclear material is withdrawn from the verification regime, it effectively goes into a black hole as far as the safeguards system is concerned and there is nothing other than a promise from the state in question that the material is safe from diversion to nuclear weapons.

The NPT’s silence on the use of nuclear material for non-peaceful, non-proscribed military purposes was not an oversight. At the time of the treaty’s drafting, some non-nuclear weapon states were contemplating nuclear-propelled vessels for their navies and wanted to ensure that such activities would not be prohibited. Non-nuclear weapon states were also resistant to the prospect that they would be obliged to subject any non-proscribed military use of nuclear material to IAEA safeguards, but nuclear weapon states would not. In the end, this loophole was allowed into the treaty so that a consensus could be reached on the text of the NPT. The implicit exemption of non-peaceful, non-proscribed military activity from IAEA safeguards in the NPT was then made explicit in INFCIRC/153.

Early plans of some non-nuclear weapon states for nuclear-propelled vessels did not eventuate, and very few such states have pursued this technology since. In 1987 Canada announced that it would be purchasing a fleet of nuclear-powered submarines which, at the time, raised similar analysis and consternations to those stimulated by the recent AUKUS news. Had the Canadian plan to acquire the submarines progressed, Canada would have been the first non-nuclear weapon state to invoke Article 14 of its comprehensive safeguards agreement. Ultimately, public opinion turned against the nuclearization of Canada’s navy and Canada did not have the support of the US, and so the plan was quietly scrapped.

The only other non-nuclear weapon state that has publicly acknowledged that it is pursuing a nuclear-powered submarine fleet is Brazil. Brazil has been working toward this goal since the 1970s and has developed its own uranium enrichment capacity and is working on designing and building its own naval propulsion reactor. Interestingly, Brazil considers nuclear propulsion in submarines to be ‘a peaceful application of nuclear energy’, largely so it aligns semantically with the regional obligation for nuclear energy to be used ‘exclusively for peaceful purposes’ under the Tlatelolco Treaty. To this end, Brazil has also negotiated a slightly different Comprehensive Safeguards Agreement with the IAEA to recognize its perception of nuclear propulsion as a peaceful activity. There remains a clause that allows Brazil to negotiate with the IAEA to limit the Agency’s access to any nuclear material being used for nuclear propulsion, but this clause has not yet been invoked by Brazil. Current estimates are that Brazil will not have a fully operational nuclear-powered submarine until the mid-2030s. Given the fact that AUKUS is in its very preliminary stages, if the nuclear submarine plan goes ahead, it is unlikely that any Australian submarines will be in the water until the mid-to-late 2030s, so it may very well be a race between Australia and Brazil as to which non-nuclear weapon state reaches their goal first.

One of the key issues with Australia acquiring nuclear submarine material and technology from the UK and the US is that it will likely involve the use of Highly Enriched Uranium in their nuclear reactors. Brazil, on the other hand, is predicted to use Low-Enriched Uranium for its submarines. The important difference between the two enrichment levels is that Highly Enriched Uranium is weapons-grade, meaning it can much more easily be diverted for use in nuclear weapons. There is no real danger that Australia will divert nuclear material to use in weapons, or that it will otherwise lose track of unsafeguarded material. The three AUKUS states immediately notified the IAEA which plans to engage with them ‘in accordance with their respective safeguards agreements’. The main concern is that acquisition of nuclear-powered submarines will undermine the long-held norm against withdrawing material from the IAEA verification regime and set a poor precedent for other non-nuclear weapon states. If Australia can withdraw Highly Enriched Uranium from IAEA safeguards, why can’t others?

While the US and the UK are unlikely to share their nuclear-propulsion technology with any other allies, Russia also has a fully developed nuclear submarine fleet powered by Highly Enriched Uranium. AUKUS has already raised speculations that Russia might decide to ‘market its nuclear-powered submarines to other nations’. It should also be borne in mind that twenty-two countries have at least 1kg of Highly Enriched Uranium in their civilian stores, with eight countries possessing more than 1000kg. Aside from nuclear-powered submarines, other non-proscribed military activity for which safeguards could conceivably be withdrawn include the actual or feigned development of military research reactors and nuclear propulsion for space vessels.

A lot can happen in fifteen years…

The above brief discussion of some of the issues with the NPT and its verification grey area is really just the tip of the iceberg for the legal and political ramifications of Australia’s plan to acquire nuclear-powered submarines. There are complex bilateral nuclear cooperation agreements that need to be factored in (and possibly renegotiated); Australia will need to assure its allies in the South Pacific that the regional nuclear-free zone will be respected; and there are concerns that AUKUS will also undermine the norms relating to the regulation of missile trade. Australia’s plan to acquire Tomahawk cruise missiles as part of the AUKUS arrangement has not received quite as much media attention, and yet raises other questions about Australia’s commitment to non-proliferation more broadly.

Australia’s rationale for acquiring nuclear-powered submarines is that they are needed for national and regional security. But the global security environment is continually evolving, and fifteen years is a long time in international and domestic politics. Whether or not the AUKUS submarine plan goes ahead remains to be seen. In the interim, however, the fact that Australia will even be considering invoking loopholes and technicalities in the legal frameworks will only serve to undermine the international non-proliferation regime.

Monique Cormier is a Senior Lecturer at the University of New England School of Law in Armidale, New South Wales. Her main research interests are jurisdiction in international criminal law and legal issues relating to nuclear non-proliferation. Recent publications include The Jurisdiction of the International Criminal Court over Nationals of Non-States Parties (Cambridge University Press, 2020) and ‘Can Australia Join the Nuclear Ban Treaty without Undermining ANZUS?’ (co-authored with Anna Hood, Melbourne University Law Review, 2020).